Large earthquakes are immediately followed by numerous aftershocks; however, many of them are missing in existing earthquake catalogs, mainly because they are masked by high-amplitude, larger-period mainshock waves and their seismic phase arrivals are overlapping (Kagan, 2004). Recovering these missing ‘early’ aftershocks is essential for understanding the physical mechanisms of earthquake interaction (e.g., Dieterich, 1994), tracking the post-seismic deformation around the mainshock rupture zone and in seismic hazard studies.

While the detection of aftershocks at relatively short times after large earthquakes was so far the main target of MFT analysis, there is strong interest in applying the same approach for longer time periods and larger areas to obtain more complete earthquake catalogs. The high-resolution earthquake datasets will help the detection of aseismic transients that may precede the occurrence of major earthquakes (e.g., Kato et al., 2012).

However, the computation times (order of days) required for applying MFT to relatively small-seize problems, prohibits the larger-scale use of the method. In order to speed-up the processing, I would like to propose a joint collaboration for implementing the MFT codes on parallel machines and applying them to seismic data in Japan. 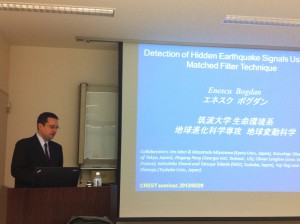